Sister Ingrid Oletti keeps going.  Day after day, she makes the rounds in Katatura — a city in Namibia whose name means “the place where nobody wants to go.” 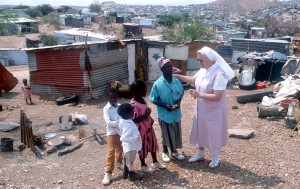 Sister visits the poor in Katurura

The German Missionary had served in the south of this African country, as a teacher, before coming to Katatura, a city just north of the nation’s capital of Windhoek.  Here the “upper class” live in tin huts, banged together from old, rusty barrels, car bodies and colorful advertising signs.  Others sleep under plastic bags, while their children live in scrapped cars.

This day, Sister Ingrid steers her white car over roads without signs, searching for a woman who visited her at the St. Vincent de Paul Center earlier that morning.  She finds Naomi in a small windowless corrugated iron shack that actually belongs to her sister and brother-in-law, and their two children.  Naomi and her own four children sleep on the dirt-and-rock floor.  There is no light, no water, no furniture — and no protection against the bitterly cold African nights.

Sister Ingrid talks with Naomi, discovering that the family often goes days without food.  It is a common story, one this Missionary has heard many times before — but her attentiveness and loving concern make Naomi feel that this is the first time her new friend, Sister Ingrid, has listened to such a sorrowful tale.  Sister Ingrid promises Naomi food for her and her family, and teaches her to make fried-cake.  The Center will provide Naomi all the ingredients to make fried-cakes; Naomi can then sell the cakes, buy ingredients to make more — and have additional money to purchase food for her family.

Before she leaves, Sister Ingrid gives the children some candy.  Before little Ben has completely unwrapped his sweet, he runs over to Naomi so that his mother can have the first taste.  “Karunga ne mu yambeke,” Sister Ingrid says to the family as she leaves, “God bless you!”  But this mother and her children know He already has — in the person and presence of Sister Ingrid.

And then Sister Ingrid is back in her car again, going to see another family; this time, an elderly woman who is raising her three grandchildren and trying to get them into schools.  Sister Ingrid will try her best to help them, even if she has to put the whole family in her car and drive them from school to school to find a place where they can get an education.

“We have visited some 1,400 families in their homes — and this figure grows by the week,” Sister Ingrid says of the outreach from the center.  Hundreds more come daily to the Center itself.  “We have little money for food and other essentials, but nobody leaves here empty handed.”

Or, it would seem, without hope — thanks to this Missionary Sister who heard the call to “go” and who keeps doing that, day after day, seeking out and serving the poor. 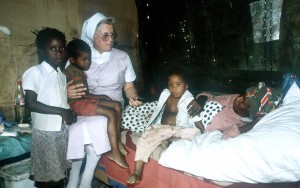