”The Match that Lit the Fire”

Pauline Jaricot & Our Church in the US

Early in the 19th century, a young French girl, Pauline Jaricot, inspired by letters about the Missions from her brother, starts gathering together small groups — mostly workers in her family’s silk factory. She asked each member of the group to offer daily prayer and a weekly sacrifice of a sou, about a penny, for the Church’s worldwide Missionary work. Pauline insisted that her efforts be directed to all the Church’s Missions, that it be universal. 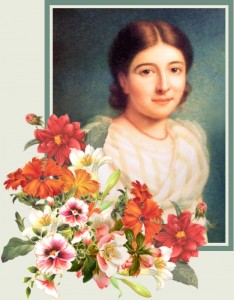 From Pauline’s prayerful efforts came the Society for the Propagation of the Faith . . . now one of the Pontifical Mission Societies. The very first collection in 1822 supported the vast diocese of Louisiana, which then extended from the Florida Keys to Canada, as well as the Missions of Kentucky and China. Philadelphia was a part of this diocese.  So in essence our “Mission” Diocese at the time, received some of the first donations from the Pontifical Mission Societies.   The office for the Archdiocese of Philadelphia has been in existence since 1911 celebrating over 100 years!

The United States continued to receive funds until 1908, when we became mission independent.

The Pontifical Mission Society for the Propagation of the Faith continues to seek prayer and sacrifice for the world’s Missions, now some 1,111 dioceses in Asia, Africa, the Pacific Islands and remote regions of Latin America. Help is offered for pastoral and evangelizing programs, for catechists and their work, to build churches and chapels, for the work of Religious Communities in health care and education, and for communication and transportation needs.  Today, Pauline’s legacy and her quest continues to “love without measure…without end.”

Societies, from 1950 to 1966. He clearly and effectively communicated the Catholic Church’s message and mission on radio and television, as well as through his books and other writings. He presented the inspiring stories of the Missions and told of the love and joy of those serving the poor in those areas of the world.

Servant of the People
Archbishop Fulton Sheen was one of the Church’s great Missionaries. In 1979, the Jesuit magazine America called him “the greatest evangelizer in the history of the Catholic Church in the United States. He lavished personal attention on both rich and poor.”

But mostly, Archbishop Fulton Sheen had a passion about helping the world’s poor. As National Director of the Pontifical Mission Societies from 1950 to 1966, he raised more money for the poor than any other American Catholic, an effort that was augmented by the donation of more than $10 million of his personal earnings. Not long before his death, he declared “My greatest love has always been the Missions of the Church.”

Embracing the World in Prayer
In February of 1951, Archbishop Fulton J. Sheen in a radio address [The Catholic Hour], inaugurated a World Mission Rosary.

We must pray, and not for ourselves, but for the world. To this end, I have designed the World Mission Rosary. Each of the five decades is of a different color to represent each of the five continents.” Praying this Rosary, Archbishop Sheen said, would “aid the Holy Father and his Pontifical Mission Society for the Propagation of the Faith by supplying him with practical support, as well as prayers, for the poor mission territories of the world.

More about the World Mission Rosary.

Life Worth Living – Until the Very End
During the last decade of his life, while battling serious heart disease, Sheen continued at a breathtaking pace to travel, speak, and write. During the course of his more than 50 year career in the Church, he wrote 66 books and countless articles. No other Catholic figure of the century could match his literary productivity. Book royalties and television fees went almost exclusively to the Pontifical Mission Societies.

In October,1979 Sheen met John Paul II in the sanctuary of St. Patrick’s Cathedral in New York. Thunderous applause greeted their embrace. The Pope privately told the 84-year-old Archbishop that he had been a loyal son of the Church. Nothing could have been more pleasing for Fulton Sheen to hear. He died on December 9, in his chapel before the Blessed Sacrament.