A young girl, through her lov

e of God, inspired others to follow her example of prayer and giving to others.

This seventeen-year-old recognizes the importance of her baptism and God’s calling to each of us to bring His word “ . . . to the nations.”

This intuitive girl, known as Pauline Marie Jaricot, became the founder of the Pontifical Mission Societies and will be beatified this May, 2022.  She, during Lent, can be our perfect model of Sacrifice, Giving to those in Need and Prayer.

Pauline Jaricot’s life was that of a lay woman—a friend of both Saint John Vianney and Pope Gregory XVI, who was miraculously healed through the intercession of Saint Philomena.  Her life was one of extremes . . .  her early childhood marked by the exclusive society life in Lyons, France complete with unending wealth . . . then her conversion which led to giving it all away in her efforts to be Missionary to the poor.

Pauline’s life, at a young age, was full of good examples from

her parents, who always had something for the poor and for charity work.  Pauline grew up admiring her parents’ good deeds towards everyone who knocked at their door.  Her visits to the Holy Sacrament and frequent attendance of the Eucharist cultivated her intimacy with God and desire to help others. 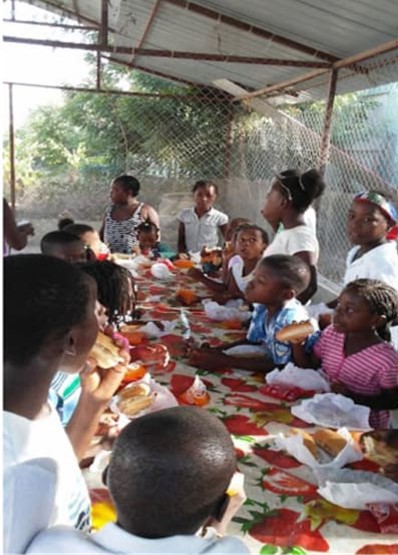 With her parents as her mode and her love for God, she began to work with the poor every day, visiting the hospice for the incurably ill on a daily basis, bandaging their wounds or sitting at their bedsides.  She dressed simply, in a style not befitting of her and her families’ stature, but of those with whom she spent so much of her time, the poorest of the city.   This is the example of the lives of the Missionaries that she helps support, even today.

Like the Passionist Missionaries in Tabarre, Haiti, who provide food and supplies for about fifty impoverished families every month.  Without an education, finding work that pays steadily is not an option for these families who love their children dearly.  “Home” a shack with no bathroom or kitchen – exposed to the cruel elements of nature.  Far worse, however, is their children’s hunger.

Twice a month, the Passionists give families basic food items like rice, beans, pasta and cooking oil.  Many families in the Missions would not escape the threat of starvation and malnutrition without the efforts of Religious Brothers and Sisters, priest and lay pastoral leaders who reach out to these vulnerable communities, just like Pauline did, and bring hope!

Lent is a time of GIVING . . . of making personal sacrifices for those most in need.  Would you give $2.50 a day during Lent – to help buy rice for Mission families?  Whatever you can send carries the message to a Mission family that the Lord is always near the suffering – as was Pauline’s vision.

Lent, as Pope Francis has advocated, is a time of dedicated positive actions, such as perform one act of kindness daily, call a forgotten friend, run errands for a neighbor weekly as examples.  Or Lent can be practiced with acts of self-denial, like giving up your favorite food, beverage or sweets, limiting television viewing, etc. These are both ways to reflect on the sufferings of Jesus and His undying love for us.

Pauline Jaricot’s life was not without crosses to bear.  She had pro-longed illnesses, survived a severe fall which affected her speech and movement, suffered betrayal and humiliation from trusted friends and became a beggar as she spent the last period of her life in absolute poverty.  Through all of this, Pauline was always driven to help the Missions and the poor.

This spirt, in 1819-20, drove her to ask  friends, workers and relatives, to sacrifice, as she would, to support Missionaries.  She gathered worked in her family’s silk factory into “circles of ten” who pledged to pray daily and sacrifice a penny a week.

The “circles of ten” would reach out to form new groups and “the little of many” sacrifices inspired by Pauline grew to become the Societies we know today.

Pauline’s sacrifices have been an inspiration to Missionaries.  As Sister Veronica Cibarika, a Missionary Sister of Charity, in the Solomon Islands today explains, “Nothing is easy, every job, every vocation is difficult. However, to be a Missionary, to leave your family, your friends, your way of living – it is truly a great challenge. The greater the sacrifice, the greater the mercy of God who is always with us.”

Pauline, as a young girl, liked being in Church and was especially attracted to the Tabernacle and the majestic statue of Our Lady of Grace, depicting Mary stretching out her arms to present the Child Jesus to the faithful.  Once Pauline is said to have asked her Mother, “Can I stay a little longer?”  I have not yet finished saying everything to Jesus; so could you come and get me later?”

Lent is a time of prayer.  It is a time to reflect on our own spiritual journey as we walk with the Lord.  And what a better commitment than to pray for the evangelization and Missionary activity in the entire world like Pauline?   She founded the “Living Rosary” movement—groups of people dedicated to praying a mystery of the Rosary for the Missions.  This may have been the inspiration of the Societies own National Director from 1950-66, Venerable Archbishop Fulton J. Sheen, to develop the World Mission Rosary. Consider praying this Rosary daily or weekly in Lent.  Each decade, represented by a different color, reminds us of a Mission area where we are called to evangelize.

This Lent, will you help Missionaries play a critical, life-saving role for countless families around the world?  They cannot do it alone.  They urgently need your most important gift, your prayers  . . . and your help.   You mean that much to our Missionaries and the poor. You mean everything.  Please be as generous as you can.  And please be assured that during Lent, I will remember you and your intentions, at Mass and remember you in my prayers.

Thank you for your help for our Missions this Lent!